As one of the most popular game fish in the United States of America, it can be found almost anywhere and is great in numbers

Contents show
1 Can you eat Largemouth Bass?
2 What does it taste like?
3 Can pregnant women eat it?
4 The Best Size to Eat
5 How do you cook them?
6 Why is it more popular to fish for bass than to eat bass?
7 Related Posts:

Anglers love these fish, they are solitary fish and are apex predators in their ecosystem.

Found in lakes, rivers, ponds, and reservoirs, they favor slow-moving waters and dense underwater foliage that provide cover when stalking and hunting their food.

These have many names, also commonly called the green trout, bucket mouth, or Florida bass.

The short answer to the question “Are largemouth Bass good to eat?” Is yes. They are, but they don’t have the best reputation for flavor out of all the freshwater fish out there.

A lot of anglers would argue that bass is more fun to catch than they are desirable to eat. 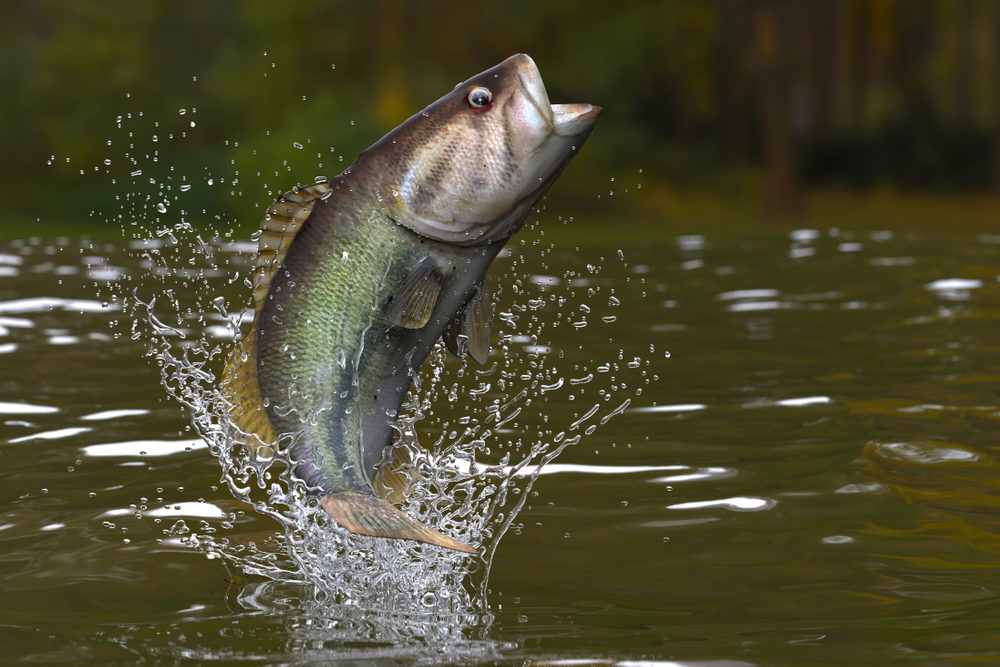 Can you eat Largemouth Bass?

The largemouth bass is edible and will give you a taste that you will not forget easily.

There is nothing wrong with eating it and you don’t get sick from eating it, much like the majority of other freshwater fish.

However, largemouth bass is not the most favorite of its species to eat, most would argue that smallmouth bass is much more palatable.

This is due to the largemouth bass having a fishy flavor that may not go down well with everyone, you could equal this as being similar to mackerel or herring, perhaps anchovies, that have very strong fishy flavors.

It does have white meat with a firm and tender texture. Its white meat may be a bit deceptive as many white meat fish are not quite as fishy in taste and smell. Largemouth bass will catch you out.

The smell of fish that it produces makes it unsuitable for indoor cooking as well unless you enjoy your home smelling very strongly of fish.

It has a very meaty texture with very few bones inside the meat. You can easily grill or fry it and maybe even add it to a fishy stir fry or another dish.

Its taste is changeable per fish, it will likely stay fairly consistent if you were to fish continually in the same place but if you were to go to other locations it may taste different.

This is due to its flavor being attributed to its diet and habitat. They can often be found in weeds eating things such as crawdads, bluegills, and sometimes even bird fledglings or snakes!

These fish are not quite as active as other fish, they will usually retreat into slops when the water heats up and they will wait to ambush their prey amongst the weeds and foliage.

Their meat is fairy dense and moist, but if you have tried smallmouth bass before you may find that the meat of the largemouth bass is not quite as clean as that of its smaller cousin.

One other argument about their taste is that if they are caught in stagnant and muddy waters this flavor will resonate in their meat and you won’t be able to disguise this no matter how much seasoning or sauce you put on it or what you pair it with.

It is worth remembering that lakes are usually cleaner in the colder winter months before the algae bloom in the summer months.

It is recommended you catch your lake bass in the cooler months if you want to eat them, rather than in the summer.

Taste is very dependant on where you get your fish from, clean water, or murky waters and don’t forget the significance in the summer of an algae bloom.

There is no set flavor to this fish because there are so many factors that go into the taste of it.

These are some of the most popular game fish and are super rich in vitamins and protein while being low on calories. They can be delicious when caught in the right place and cooked right too.

Their texture is meaty and lacks in bones, which makes it less of a hassle to eat. Don’t you just hate eating a tasty fish and having to pull out all these tiny bones?

While the flavor is very fishy, you might be able to mask it with seasonings, but for people who hate fishy flavors, largemouth bass is probably not the fish for you. This fish can become flaky when cooked fully.

Some people may be turned off by bass due to the occasional result of a rather unpleasant and pungent smell coming from their bodily cavities.

This stench can usually be rid of through a lot of rising and generally once you have cooked up your fish there is no trace left.

A great deal of fish often has rather unpleasant pungent smells when raw, although there are a few that don’t.

As long as you get bass from a healthy and cool lake in the correct seasons and ensure your bass is clean and washed before cooking, your fish should taste and smell lovely. 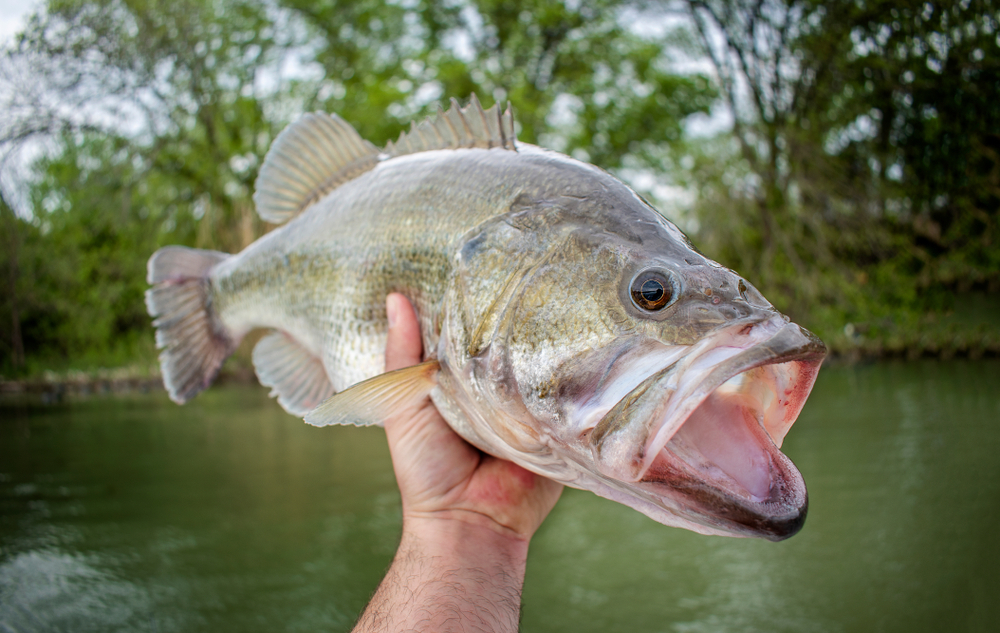 Can pregnant women eat it?

There are certain cautions with largemouth bass for pregnant women and children.

This is due to the mercury content that these fish have, also while a normal healthy adult may just get a bit sick from eating fish that has come from polluted waters, a child or pregnant woman could suffer much worse effects, so ensure that if you intend on catching a fish to eat that the local area is not polluted as this could be very dangerous.

Pregnant women need to be cautious of a lot of foods during their pregnancy and while fish and largemouth bass, in particular, are considered generally quite safe to eat, there are some cautions.

Pregnant women should be especially cautious due to the possibility of getting mercury poisoning from eating fish.

It has been found by the Nations Resources Defense Council that black and striped bass do contain particular levels of mercury.

This is an area to be cautious of, so if any is eaten it should be a small amount. If you are concerned though, it is best to avoid it until after the baby is born and then give it a try.

The Best Size to Eat

Size does matter, in largemouth bass. You don’t want to catch a bass to cook that is over 15 inches in size. This is due to age more than anything.

Smaller bass is usually younger and due to their younger age, they will usually have much more tender meat and a more enjoyable flavor.

Older largemouth bass will be a bit tough and due to their age, much like any other animal, they will accumulate toxins over the years.

Obviously, you would like fewer toxins in your food so smaller and younger is better in this case, not to mention having more tender meat to eat.

Not only is it about the texture and toxins but it is also better to cook a smaller fish simply because it’s easier.

Like with any meats, the bigger it is the more difficult it is to cook. If you ever tried cooking a thick steak, you can use this for reference.

A bigger piece of meat will be more likely to have parts of it that are less cooked or more cooked than others, some parts will be almost raw while others will be closer to burning.

You save yourself any hassle by just trying to hook yourself a smaller fish if you are intending to cook it.

How do you cook them?

Cooking your largemouth bass, so long as it is from an unpolluted body of water, is not different to how would you cook many other fish.

You can cook it in many ways for any dish you want. Try broiling, pan-frying, baking, grilling, deep-frying. You can also make a fresh fillet out of your catch if you wanted to try that too.

A few things to keep in mind when you catch a largemouth bass to eat. First of all, clean it as soon as you have caught it, and also be cautious when removing the skin and do not overcook it.

Before you delve into the cooking you need to clean the fish inside, cutting a slice in its underside and remove its intestines and organs and wash it thoroughly.

You should remove the caudal fin and its other fins as well, this is not too difficult. Then should you want to, remove its head. After this simply take your fillet knife and create your bass fillets.

Once you’ve cut off the fillets, pull off the skin. You can cook then in any way you please.

Some may find you make nice fish nuggets, fits for deep frying, others may like them served with spices, herbs, and a salad. It is totally up to you.

Why is it more popular to fish for bass than to eat bass?

The largemouth bass is exceptionally popular among anglers, mainly because they can be caught very easily.

They’re very aggressive feeders and are known to strike at pretty much anything they think is alive, so will easily go for your bait.

The popularity of it being eaten is ow, simply because the taste is disputed, a lot of people simply dislike the flavor. So largemouth bass is primarily fished for sport rather than food.

A lot of larger bass is also released back into the water after being caught as many of the larger specimens are breeding females and should remain alive to encourage breeding so the population continues to be as fruitful in the future.

There is also a lot of catch and release efforts around this species since it is such a popular game fish if it fished more than any other fish in the USA.

If angles ate every fish they caught then the population would decrease rapidly.

For a great deal of these catch and release anglers, the idea of eating a bass is profanity.