Fish are one of those types of animals where we often don’t think about them eating.

Contents show
1 Do different fish eat different things?
2 Do fish eat differently in different seasons?
3 What do carp eat?
4 What do bass eat?
5 What do rainbow trout eat?
6 What do pike eat?
7 What do walleye eat?
8 What do salmon eat?
9 Summary
10 Related Posts:

For many people, fish are simply a food source, and what they eat might seem unimportant. But once you think about it, it is something that you just can't stop thinking about. So what do fish eat in the wild?

The answer isn’t as simple as you may think. But if you want to find out what fish eat in the wild then you are in the right place.

We’ve put together this ultimate guide full of all the information about the different food that different types of fish eat in the wild. So let’s get started. 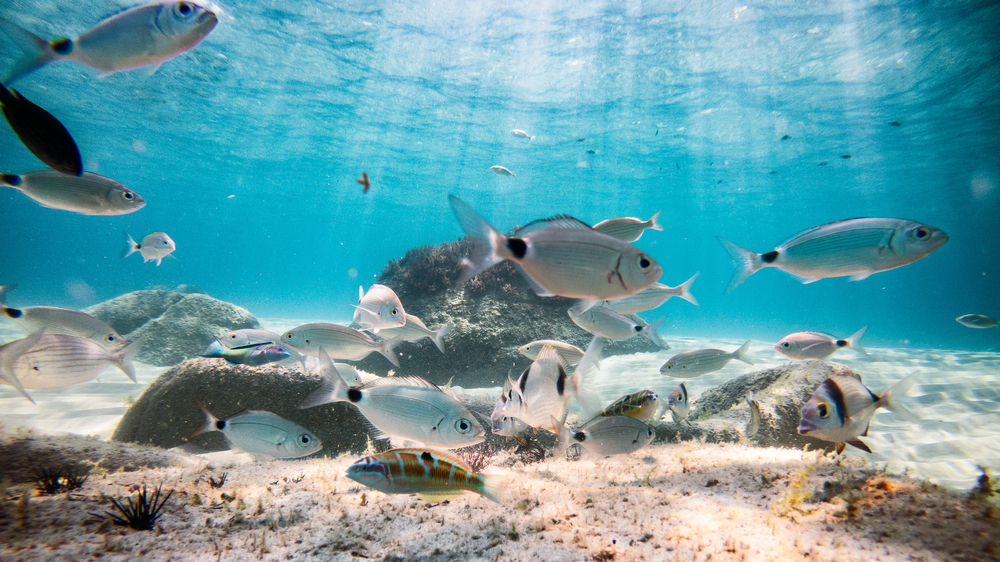 As we have already mentioned, this is actually a pretty complex question to answer, and that is primarily because different fish eat different food.

But even though different fish eat different types of food, they primarily get their nutrients from a similar food group.

There is a huge misconception that fish primarily eat water, but in reality fish actually get a lot of their nutrients from other types of animals.

Everything that they eat, they have to be able to access from their position in the water which is why so many different types of fish eat similar things.

Primarily, fish will get their nutrients from things like leeches, small insects, crustaceans, and sometimes even smaller fish.

As well as eating other animals for protein, fish will also commonly consume things like algae and other plants that can be found on the floor of the water that they live in.

But this is just a general overview, and we’ll be taking a look at what different types of fish eat specifically a little bit later on.

Another thing that impacts what fish eat is the seasons. Fish are not hibernators, but the autumn and winter months do impact their activity.

During the winter months, most fish spend their time on the “ocean floor” or the floor of whatever bed of water they live in.

They do not swim much and instead, the majority of their time is spent resting. As they are not swimming, they require less energy and because of this, they eat less.

Another reason that fish tend to be less active in the winter is because food is more difficult to come by.

Thankfully for fish, the floor of the water is where the water is the warmest so there are some other insects and small animals that will also stay close to the ground during the winter months.

These animals tend to include smaller fish, plankton, and things such as leeches which are high in protein.

The high level of protein is also part of the reason that fish eat less frequently during the colder months.

Protein provides energy, but as the fish are not swimming they will not use this energy as quickly and it will sustain them for longer.

But that’s enough generalizing, let’s take a look at what specific types of fish eat. 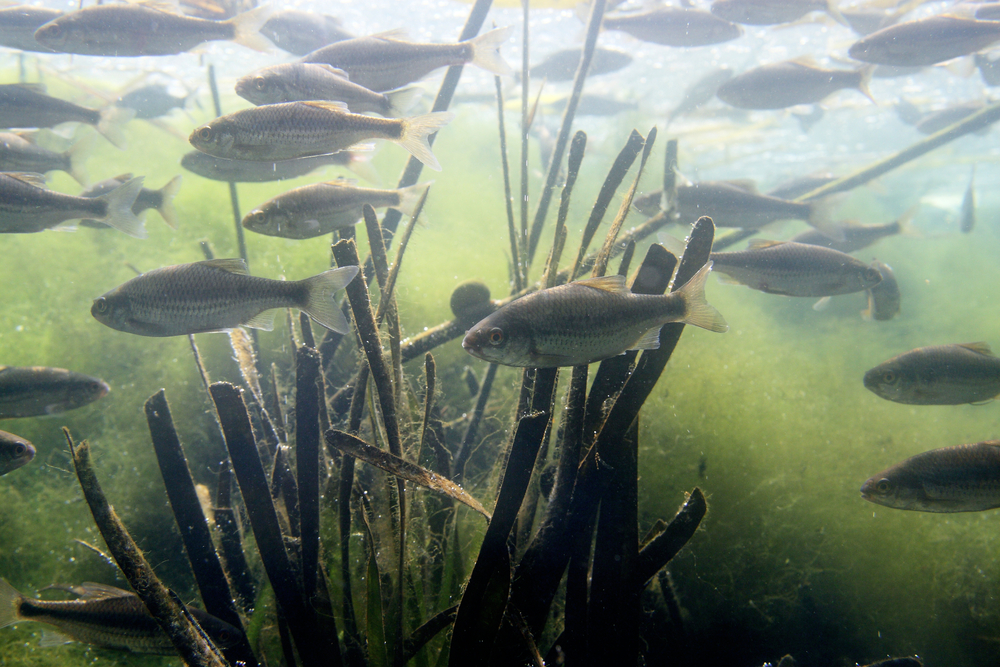 What do carp eat?

First let’s begin with one of the most common types of fish, carp.

These are one of the types of fish that belong in the greedy category as they will eat pretty much anything they can get their gills on.

Generally, carp tend to prefer foods that are high in protein, and so they tend to seek out fish that are smaller than themselves and crustaceans.

They are also partial to eating other types of animals such as insects and worms, which are also full of protein.

Their fixation on crustaceans and animals like this is beneficial for carp, especially during the colder months of the year.

But as we have mentioned, carp are greedy. So as well as consuming foods that are high in protein, they will also eat algae and other vegetation that can be found in the water.

The main thing you need to know about carp is that they are greedy but they only eat food that is easily available to them, which is pretty much anything that can be found along the floor of the water.

But, worms, in particular, tend to be a favorite if you are fishing for carp.

What do bass eat?

Now let’s move onto another well-known type of fish, bass. In a certain way, bass are very similar to carp, but in another way, they are very different.

If we had to categorize bass, we would put them in the cannibal category.

Okay, so perhaps cannibal is a bit too far, but bass are one of the types of fish who primarily like to eat other fish.

Bass tend to avoid vegetation unless they are unable to find anything else, and will instead hunt down a variety of different sources of protein.

This will include insects, worms, and leeches. It will also include frogs, small fish, and crayfish.

More surprisingly, the known foods that bass have eaten also include mice and small turtles if they can get their mouths on them. So you can kind of understand why we have categorized them as such.

If you want to catch bass, the best thing to try is smaller fish, especially if you are attempting to catch them in a large body of water.

What do rainbow trout eat?

Another type of fish that you have probably heard of is the rainbow trout.

Despite their colorful name and the cute picture you might have in your head of a fish named after a rainbow, these fish actually fall into the cannibal category.

If anything, rainbow trout might be even more cannibalistic than bass as they will point blank not eat anything other than sources of protein.

This means that zero percent of a rainbow trout’s diet consists of vegetation, it consists solely of other animals. But rainbow trout tend to have a less diverse diet than bass, which might be because of their size.

While bass are quite adventurous in the different types of animals they eat, rainbow trout tend to stick insects, worms, and small fish that they can easily access in the water that they call home.

Sometimes they will eat mice and other small rodents, but the majority of their diet consists of fish.

Based on this, if you are trying to catch rainbow trout we would recommend using smaller fish, however, they also seem to enjoy flies and fish eggs, so you have lots of options to choose from if your initial attempts are unsuccessful.

What do pike eat?

Now let’s take a look at pike. Pike are very large fish and they are usually at the top of the food chain in the bodies of water that they live in.

Due to this, we are going to categorize pike as predator fish.

However, we could also categorize pike as greedy because they will eat pretty much anything that they want, as long as it is another animal.

They very rarely eat any vegetation and pretty much have the pick of every other animal that lives around them. They primarily eat bass, but they also have cannibalistic traits as pike have been known to eat pike that are smaller than them.

So these fish also fit in the cannibal category. As well as eating fish, pike have also been known to eat mice, frogs, and even snakes if they can get access to them.

So, pike will pretty much eat anything they have access to. They are the boss in their bodies of water and they are happy to show it by eating anything that they want.

If you do decide to fish for pike you would be best off aiming for the dark and deep areas of the water as this is where they tend to lurk, waiting for their opportunity to pounce.

What do walleye eat?

Primarily, walleye will eat other fish and they seem to enjoy it as they actively choose other fish over other types of animals that live in the water with them.

That being said, walleye will also eat worms and things like crayfish if they are given the opportunity. So pretty much anything that is high in protein will be a success among walleye.

Based on this, if you want to try and catch yourself some walleye, we would recommend using protein as bait. In particular, leeches and worms tend to be successful if you are trying to catch walleye.

What do salmon eat?

Finally, let’s take a look at what salmon eat.

Salmon are a tricky fish to categorize, but we would probably have to put them in the greedy category. Although we are doing this very tentatively.

Salmon is often referred to as kokanee and it is easily one of the most popular types of fish that exist.

While salmon have been known to eat insects, plants, and shrimps, their favorite food is zooplankton. And they go nuts for it.

In fact, their anatomical design is the way that it is to make eating zooplankton easier for them. Due to this, salmon tend to follow the zooplankton wherever they go so that they always have a supply of food.

But while zooplankton is a popular choice among salmon, the best bait to use when trying to catch salmon is insects. So you should bear this in mind the next time you try to fish for salmon.

In short, there is no straight answer to what fish eat in the wild.

But most fish will eat either vegetation, insects, or smaller fish to sustain their lifestyles and give them the energy to keep on swimming.